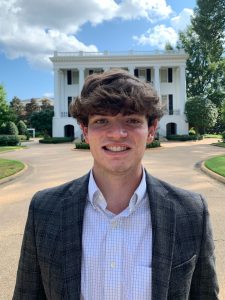 Favorite Experience at UA: I have thought a lot about how to answer this question, and I can say that my best success on this campus is my involvement in general. I’m a kid from the heart of rural Alabama and neither of my parents went to college. When I got here it was the first time I had ever been on my own and I honestly didn’t know how things would work out. I didn’t know what I was going to study, I didn’t know what I wanted to be, I didn’t even know if I would make any friends, I was still trying to figure out who I was. Quickly I learned the best way to make friends and do something meaningful was to get involved. The only thing I was passionate about at the time was politics. I have been blessed to have had the opportunity to be a student organizer at the University of Alabama on multiple occasions. I was a student organizer for Doug Jones when he was running for reelection, I was a student organizer for Bernie Sanders when he was running for president in 2020, and to throw some bipartisanship on the resume, I was also an organizer for Todd Chase for Congress. Throughout all of the campaigns I was able to organize, I was not only learning life skills of how to be a leader, and how to form public relations, but I was also able to meet a lot of great student leaders throughout the process. My most memorable experience doing so was when I was the Campus Corps Leader for Bernie Sanders. Some great student leaders and I led a large coalition that we had formed on this campus of some progressive organizations like YDSA, UA College Democrats, and other progressive organizations. This experience is something that will stick with me forever, it was the first time that I ever had the opportunity to feel I was a part of something, and although it was work but it was fun work. Everyone I worked with is still a friend in my heart to this day. When I think back to my time being a Campus Corps Leader, I allocate that experience to my success with being able to make friends no matter what side of the political aisle they are on. This experience taught me bipartisanship, it helped me form the work ethic I have today, it even helped me figure out who I was as a person. I can honestly say who I am as a person today is a person that just wants to help, a person who wants to amplify the voices of those that are being muffled in the world, a person who is willing to fight for the defenseless.

Favorite Class: Going into my junior year I was excited to take PSC 307, Introduction to American Public Policy. This class has by far been my favorite class I have ever taken here at The Capstone. Not only was able to learn about the American legislative process, gain skills that I plan to use in my future endeavors, but I also learned the crucial lesson to design public policy that suits the best interest of those you’re representing, and not the best interest of those who are funding your campaign. My professor in this class was Margaret Purcell, I would call her my favorite professor I have ever had during my time on this campus. Her ambition to make sure her students understand in the in and the outs of our material was admirable. Her teaching tactics were admirable as well, we were tasked with creating a policy analysis for a certain bill, and presenting it to the class as if we were lobbying on behalf of the bill. It was a very fun and beneficial experience, and I hope other professors in the Political Science Department taught like Professor Purcell.

Future Plans: I plan to graduate from The University of Alabama in the Spring of 2022. After that, I plan to attend law school somewhere that specializes in human rights law and criminal defense litigation. After my time in law school, my ultimate goal is to work for a law firm that aims to help lessen the sentences of non-violent offenders while advocating reform within our criminal justice system. I hope to be in a position one day to serve the state of Alabama on a political level. It is in my interest to help the state that I love with my whole heart, whether that be in Montgomery or in Washington D.C. I look forward to what the future holds for me and for the leadership of the great state of Alabama.